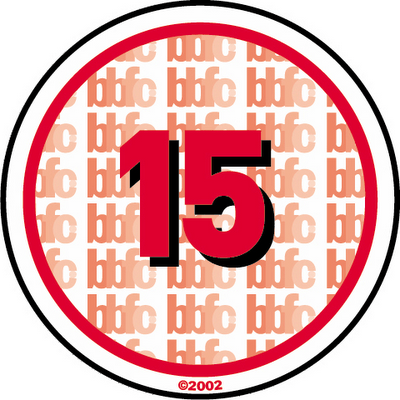 Halfway! At least in terms of weeks I have hit the top of the peak and it’s all downhill from here. Actually in my head it’s better than that because I started training about 4 weeks before the official start date to get used to the schedule and the last three weeks are tapering. Add into that mix the week I have doing the half ironman and I think that’s 11 hard weeks of training left. That is no time at all really. Gulp.

This week has been a challenge for a couple of reasons. Number 1 as usual is the weather, number 2 is feeling on the edge of pushing my running too much and number 3 is trying to cram in all of regular life. On Thursday I cancelled my scheduled 1 hour run because my legs were feeling tight – I’m pretty good at spotting when something isn’t right and if you push through those warning signs too often you end up with injuries. I was supposed to be doing a 14 mile run around coniston in Saturday which would have more than made up for it. I’ve been wanting to do that Coniston 14 race evert since I started running so when I found out my friend Viv (sporting hero) was doing it I jumped at the chance….

…. Only to find out of Friday it had been cancelled due to the snow. Boo! 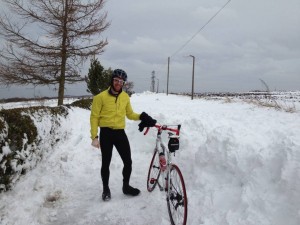 On Sunday we had quite a busy day planned with a family birthday party in Preston and band practice, I also had a 4hr ride and 30 min run combo to do. Obviously the only solution was to ride to Preston and for Pilla to meet me there. It was a pretty epic adventure, I used ridewithgps to plan a route and used my garmin as a mini sat nav. despite a couple of weird road it worked pretty well until….

…. Well I didn’t factor enough in for the snow. I did avoid the hills which I thought would be a nightmare, only to find myself in the middle of nowhere when I bumped into a couple of stuck cars. I got off my bike and despite being warned by a couple of friendly runners (I think they said there was ‘no way’ I’d get through – challenge accepted thank you) went ahead. Cue almost bumping into a wall of snow. It lay between two fields, completely filling up the road. I have never seen anything like it. 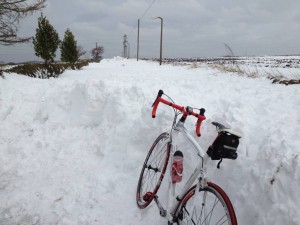 At this point I had to get off my bike and clamber through waist deep snow. At times like those you do have to wonder why you are doing it, but the sense of accomplishment having spent 4hrs in the freezing cold, trogging across snow drifts and gale force winds only to finish and hop out for a quick jog definitely put a smile on my face! 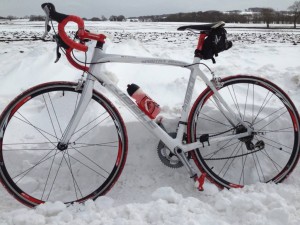 So bring on the second half of the training because if I can get through that, a couple more rides in the spring sunshine will be nothing!

As usual the actual details are here.

Oh and ps, I’m sure you’ll agree my bike looks pretty fetching in the snow, doesn’t she!