Yesterday feels like a dream. A weird, amazing dream where I completed a half ironman, 70.3 miles of swimming, cycling and running. And loved every second of it. The last time I did a triathlon was 4 years ago. I couldn’t swim well, I started in way too fast a group and got a puncture on the ride. The run was miserable and by the time I’d finished it felt like everyone had gone home. Yesterday could not have been more different…

Waiting by the start, I’m looking out at the turn buoys on the swim course. The swim is pretty straightforward, you swim up the rowing lake to about half way, you swim the 50m across then you turn round and come back. The only thing is, looking out at those turn points, well they look like flipping miles away.

I’m so amateur at triathlons I had to Google where to put the race sticker on my bike, I found out that everyone said it goes on the top tube. I then had to Google what the top tube was. I also had no idea where to put myself in the swim groupings, the faster swimmers went at one side (sub 40) the slower at the other. I put myself right at the front of the slower group. The water was a pretty nice temperature, or at least a good few degrees warmer than the quays. There was plenty of space around at the start. The starter is saying something but I cant really hear, because I have two swim caps on to keep warm. I guess we are pretty close to starting, so I say good luck the people around me.

We’re off, i’m expecting mayhem, the washing machine effect as everyone swims over you and jostles for position…. only it doesn’t really happen. No-one is swimming past me, or at least not many. I’m not good at swimming in a straight line so I’m a little all over the place, but I feel good and relaxed. This triathlon business is pretty straightforward. Although I wish that guy would bugger off a bit, he’s getting pretty close to me, although I bet he’s thinking the same thing about me. Ouch. So that’s what a punch in the face feels like. Eye’s watering a bit, ah well, if that’s the worst it’s no problem. I’m counting the yellow buoys as I go past, 3-2-1, then the orange one, where it’ll get a bit choppy as people turn. It’s fine, now I’m on the home straight, halfway there. Feeling pretty comfortable as I count the buoys back in 3 to go, 2 to go 1. I’m swimming right behind someone pretty sure I’m annoying them but it’s quicker swimming close to someone! Done! I get out and the timer lady says ‘something-five’. It sounds an awful lot like thirty five, but there is no way I’d be that quick. Must have been forty-five, damn I thought I’d be a little quicker than that. Went really quickly though!

Quick change onto my bike, my goggles catch on the pedal as I grab the bike, someone shouts after me, too late to take them back so they are coming on the bike ride with me. All through the route I look at them and they remind me to be more careful next time! The ride goes fast, it’s very flat. I’m guessing I’ll do about three and a half hours. No point in being overly worried about speed yet, just enjoy being in the race. First hour done and i’ve covered 19.5 miles. Interesting. If I keep this up I’ll get in under three hours, that would be pretty crazy. The only hill is a quick blast up Oxton bank, but it’s followed by a lovely flowing gentle downhill. Loving this! You get to trade in your battered old water bottles for shiny new Outlaw water bottles at each food station. Bonus! Start feeling a bit tired after 2 hours, but my speed is still good, not long to go now either. Up over a last incline, back through some rough roads and before I know it I’m back at transition. I wonder where Pilla is….. GO NEEEEEILLLLLLL GO GO GO GO. Yeeeaahh!!! There she is! So happy to hear that 🙂 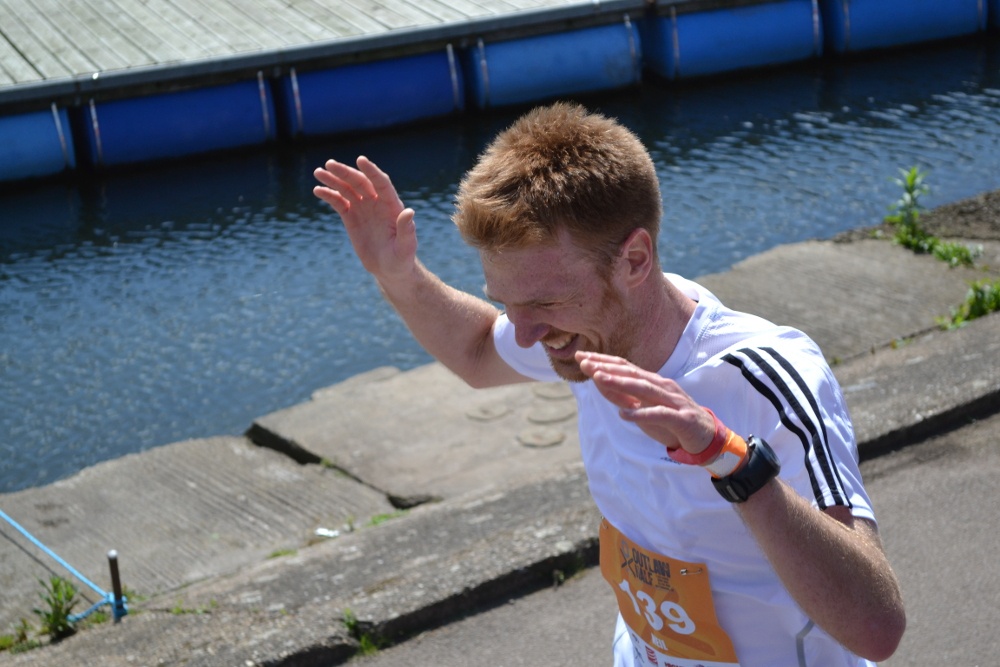 Quick change to the run now, this is home territory, the easy bit! Just as I think that I hear a loud voice “GO NEIL, THIS IS THE EASY BIT” hahaha, yeah just a half marathon, easy! Set off, legs are a little weird, I know from the brick sessions this goes quickly. Round the first corner “GO NEIL!!! VIRTUAL HIGH FIVEEE” Thanks Pilla and Steve. Big smile, totally doing this!

Weird, I appear to be running at a decent pace, around about my half marathon PB. I should probably slow down, but well it feels ok. My HR is ok, might as well carry on and bank a bit of time for when it all falls apart! First food station, might as well walk though it, give myself a bit of a break. The route is basically two laps, each one you go out and back up the river so you pass lots of runners in the opposite direction, then a loop around the rowing lake (which still looks huge). Passing a few people now. Feeling good! There are lots of people cheering and lots of very tired looking triathletes. I feel fine, i’m actually doing this! Well enjoy it while you can Neil, because soon it’s going to get bad. I loop around the rowing lake (massive) then back next to the start finish line. The guy there directs you left or right; right if you have collected one wrist band from your first loop, left if you have two. I cannot wait to have two! Loop around the bottom of the lake past the cheering squad where Pilla is doing a one women mexican wave to me. Loop out around the river, still feeling good. Back to the rowing lake (looks huge) and collect my second wrist band. Woop!

Get to the top end of the lake not sure what is going on but I still feel good so might as well push a little bit now. I notice the little huts on the side of the lake have signs on saying the distance from the finish line. 1000m, 500m. Wow, I’m about to finish half an ironman. Up until now it’s just been another training day, but it’s actually a real thing! Wow! Wow! Wow! I have two bands and get directed into the finish chute, there’s a good crowd clapping and cheering but I only really hear Pilla and Steve “GO NEIL YOU’RE AMAZING GO GO GO GO!!!” I’m the only one on the red carpet, so I get the full announcer experience. They even put tape across the finish line, wasn’t expecting that! Awesome! I get a bit embarrassed and don’t really do the full arm in the air experience. DONE!

Today it all feels like a dream. I have the medal and the memories and I’m not sure how. These are my splits: 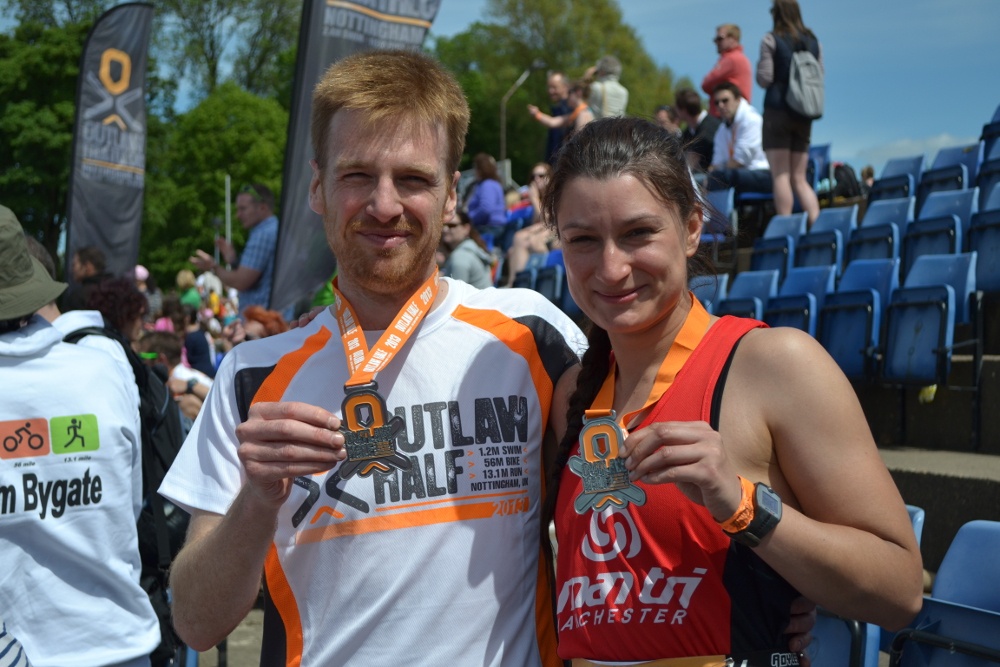 Many many thanks to Pilla and Steve for some epic cheering. The whole thing was so much fun! My outstanding memory of the day was whilst cheering on the rest of the triathletes finishing the organisers giving away prizes for being loud. We were pretty close to the front barrier by now and the announcers walks over and says ‘Who ever makes the most noise can have a free prize!!’, everyone around us makes loads of noise, but the announcer looks over to Pilla without speaking into the mic and says ‘You’re getting this for being here all day cheering the loudest!’ 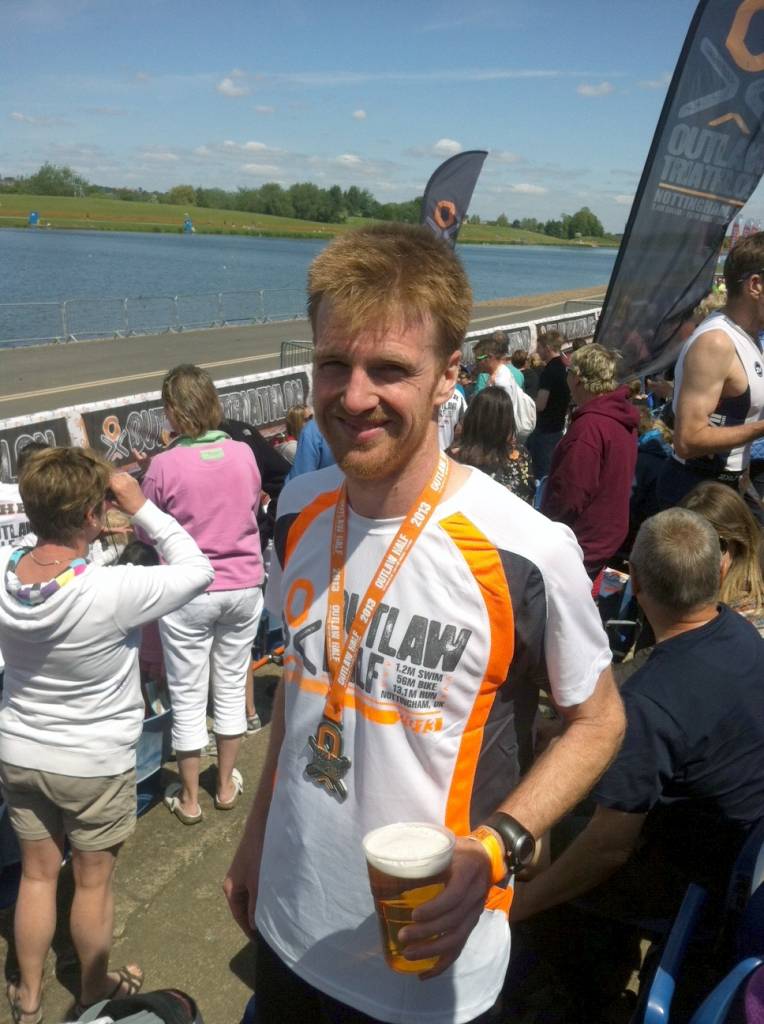 Did I tell you yet that I quite enjoyed it yesterday?